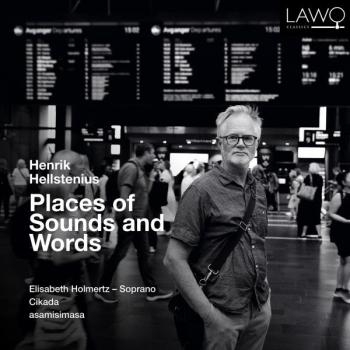 “Places of Sounds and Words” features works in which language and sounds from the world around us become part of the musical material of composer Henrik Hellstenius. The music on this release probes the nature of the relationship between sounds from the real world and musical sounds, and between language and musical sounds. What happens when the sounds of crowds, traffic, conversations, birds and animals are placed in a musical context with instruments and singing? How does the meaning of the sounds change, and how do they change the meaning of the music? Taken together can they create a new whole, new contexts and meanings? Likewise, with the spoken word, how do we understand language when it is a part of a musical composition in which language is composed into the work as sound and meaning?

The three pieces on this album are the result of a long-standing collaboration between singer Elisabeth Holmertz (“Places of Sounds and Words”) and the ensembles Cikada (“Places of Sounds and Words” and “Unfolded”) and asamisimasa (“Instrument of Speech”). They are also the result of an artistic interest Henrik Hellstenius has had to create a “theatre in music” by incorporating elements from the real world and language into the compositional process. Music is in principle everywhere, in the sounds of the world around us and in the language we speak. Thus it is natural today to create music with a larger palette than just the instrumental and vocal parts. With sounds from the world a musical tension is created using recordings of calls to police, neighbours quarrelling, shouts of joy, and the many sounds from the natural world.